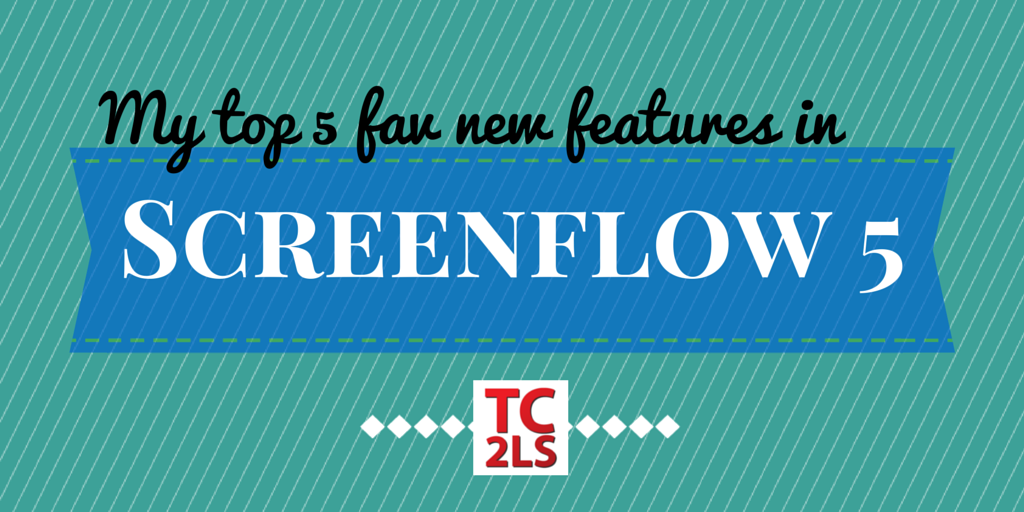 NOTE: The discount was good through December 1, 2014. After Dec 1, click on this Telestream link to access the free trial download, or to purchase ScreenFlow for the regular price of $99. You can also visit the Tools page to get a more direct link to the ScreenFlow product page.

Background (skip if you just want to hear about the new features!)

Earlier this year, on recommendation of many folks in the content marketing and YouTube markets, I picked up a copy of ScreenFlow 4 from Telestream. I have to admit I was skeptical. After all, paying cash for a prosumer product seems odd when I’ve had Adobe Premiere, a professional video editor on my computers for many years now. The problem is, I never seem to use Premiere! I’ve gotten occasional training, tried self-paced books, but Premiere is just overkill for what I want to do. I also tried the free GoPro Studio, but again, the learning curve seemed too steep.

But like I said, it came highly recommended. In particular, Gideon Shalwick (YouTube channel link), a really great YouTube and video resource, insisted that ScreenFlow was different. He assured me that ScreenFlow let him do his editing on the same day he shot, and get his projects published quickly. I couldn’t agree more!

Before ScreenFlow, I’d edited a few surf videos, some skiing and wake surfing footage, and some of my daughter’s soccer games. I used QuickTime to chop down to a series of clips, none of the video had music, titles, zoom, or changes in speed. In short, they were all pretty stinkin’ boring! And their YouTube views reflected that!

Since picking up ScreenFlow, I’ve taken the same types of video, and then added all that stuff I mentioned above. Best of all, working on the video was fun! I quickly clipped out dull footage, created lower thirds and other types of overlays, created slick transitions, zooms, and then tossed in inexpensive short video intro and segue clips from Splasheo.

All of a sudden, the parents of my daughter’s soccer team started asking how I did my editing. Same with my tech comm friends. ScreenFlow 5 promises even faster workflows, and some pretty cool new functionality.

Since I edit quite a bit of sports footage, I tend to have frequent zooms in my videos. Zooming in generally means ultimately zooming out, so for me, the new Snapback Action  feature on its own is worth the cost of the new version. This feature is a winner, and I look forward to future enhancements to the product that continue to make it even easier to use. (Hey Telestream…in case you’re listening, I’d love an alert when I overlap zooms or do other stuff that makes my export bonk!)

I admit, I’ve never given iPhoto a real shot at managing my images, and I’ve spent more than one afternoon trying to transfer/unsnarl my iTunes library. However, with direct access to each in SF5, Telestream has found a way get me to give them each another shot. Just the thought of being able to search on metadata directly while editing is giving me warm fuzzies!

With the new Telestream Media Framework, playback is smoother in editing mode. While it was ok before this, anything to bring the editing process closer to the final exported video is greatly appreciated!

It seems like this feature was aimed at app developers, as most of the demo assets I’ve seen addressed this demographic. However, I think that the tech comm and eLearning developers greatly outnumber app developers looking to publish to the App Store, so there’s an untapped market out there for this feature.

For me, I see an advantage in being able to record responsive content directly from the iOS device, rather than resizing a browser window to simulate the experience. While I haven’t needed it for a webinar or proof of concept quite yet, I look forward to simply plugging in my device, and hitting Record.

While I don’t yet work on multiple videos in quick succession, I can see where this feature would be big for dedicated editors. It allows you to queue up multiple videos for export using the same settings. This ensures consistency, and also allows you to defer processing time to more sensible hours, like lunch, or when you’re done for the day.